What is Pityriasis Rosea?

Pityriasis rosea is a common skin condition that is manifested by a distinctive skin rash that appears red, scaly and in patches all over the body. The rashes are often itchy and may be severe in three fourths of the cases.

The condition usually goes away without treatment in three months or so. The rash begins as one single large patch called the “herald patch” and this is followed by a spread to other sites like chest, back, arms and legs. 1-7 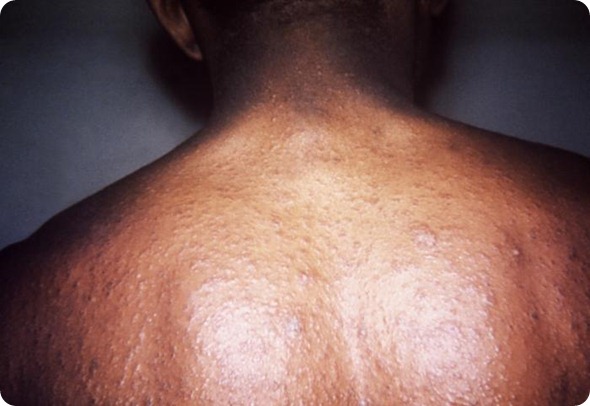 This patient presented with a generalized rash due to the skin ailment “pityriasis rosea”, the etiology of which is unknown. Pityriasis rosea is a harmless, yet itchy, scaly skin disease often found in people 10–35yrs of age. Initially, most people develop one large scaly “herald patch”, and within 1-2wks, smaller pink patches can occur on the trunk, arms and legs. Image Credit: CDC/Richard O. Deitrick

When to seek help for pityriasis rosea

Although not harmful or complicated, the itching may be irritating and may cause disturbance in sleep and daily activities. Physicians may be contacted for evaluation of the situation if the itching is severe and patient is unable to cope.

In addition, those who have symptoms for more than three months, or who have a rapidly spreading rash or develop bleeding or pus leakage from the skin lesions need to consult with their physicians as soon as possible.

The exact cause of this skin condition is unknown. Some studies show that the cause may be viral in origin. It occurs most often in the fall and spring. Although no bacteria, virus, or fungus has ever been found in these rashes it is thought that herpes viruses 6 and 7 may play a role.

Studies have suggested that some drugs may lead to drug-induced pityriasis rosea. These include:

However, despite the infection theory, pityriasis rosea is not contagious and does not spread from person to person by mere physical contact. It may still occur in more than one person in a household at a time.

Who gets pityriasis rosea?

Pityriasis rosea is quite common in people. Some estimates show that 1 in 50 people who visit a skin specialist present with pityriasis rosea. Around 0.15% of the population is affected by this condition.

The common age group affected are older children and younger adults between 10 and 35 years of age. However, extremes of ages like in infants less than a year or in eighty year olds have been reported. Women are affected twice as much as men and the reason for this gender difference is unknown.

Usually people get the condition only once in their lifetime. However, one in 50 may develop the condition more than once or repeatedly.

Diagnosis is made by clinical presentation and appearance of the rash in most cases. In some patients blood may be tested for other conditions like Syphilis that may manifest with a similar rash. Sometimes a skin biopsy is advised to check the skin cells and detect abnormal histology or pathology in the cells.

Most of the cases of pityriasis rosea clear up with no therapy within three months. The rash may disappear in 3 months or 12 weeks or so. In some it may last up to 6 months.

Treatment consists of moisturisers or emollient creams. These soothe the skin and prevent itching. For itching and inflammation control creams with Corticosteroids or pills with Antihistamines (antiallergy medications) may be prescribed.

If there is secondary bacterial infection of the skin rashes, an antibiotic antibacterial cream or ointment may be prescribed. Ultraviolet ray exposure may help some people with the condition. These however need to be performed under supervision.