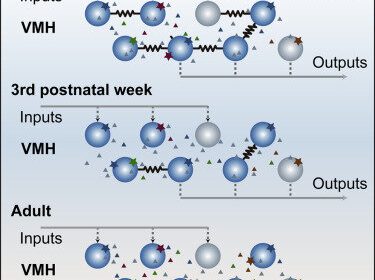 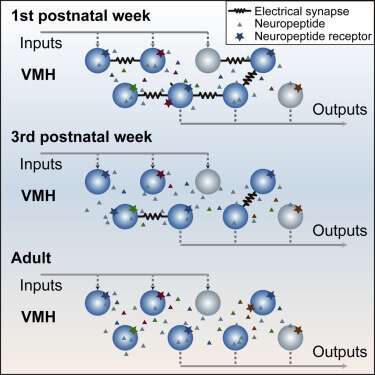 A joint research team led by Dr. Xu Huatai from the Center for Excellence in Brain Science and Intelligence Technology, Chinese Academy of Sciences, has demonstrated the unique design of the neural microcircuit in the ventromedial hypothalamus (VMH).

Using a mouse model, the researchers applied combinatory approaches to reveal a distinct developmental transition for the neural microcircuit in the VMH. They discovered that the early developmental stage features dense electrical coupling. In contrast, the adult VMH is characterized by sparse chemical synapses as well as prominent neuropeptide transmission. The absence of chemical synapses was further observed in many other hypothalamic nuclei. These findings provide a solid microcircuit basis for a better understanding of hypothalamic functions.

The study was published in Current Biology on June 2.

The hypothalamus is a multinucleated structure and internuclear connections have been extensively investigated. However, the innermost hypothalamic nuclei microcircuits have been less examined.

To fill this gap, the researchers made quadruple whole-cell patch-clamp recordings using hypothalamic slices. They first found a high frequency of electrical coupling between neurons during the early development of the VMH, which decreased gradually afterward. The researchers concluded that the electrical synapses were mediated by connexin 36 (Cx36) since conditional knockout of Cx36 in the VMH significantly reduced electrical coupling.

Paired recordings efficiently detect synaptic connections within a limited range (<200 micrometers). The researchers found that when even one-third of neurons in the range of ~400 micrometers were activated, the peak amplitudes of optogenetic excitatory postsynaptic currents (EPSCs) were insignificant in comparison to the spontaneous ESPCs of responsive neurons. "This result indicated that there are very few activated neurons in a much broader range with synaptic connections to the recorded cells. Besides, the data from rabies virus tracing further supports the scarceness of chemical synapses in the VMH," said Shao Yinqi, first author of the study.

Having explored the roles of electrical and chemical synapses in the VMH microcircuit, the researchers turned their attention to neuropeptides, which are abundant in the hypothalamus. To explore the potential role of neuropeptides in neuronal communication in the VMH, researchers incubated VMH slices with agonists and found that an analog of dynorphin could hyperpolarize VMH neurons. Such neurons consistently showed hyperpolarization after a short period of high-frequency stimulation of adjacent neurons. However, this hyperpolarization can be blocked by the antagonist of dynorphin receptor KOR (kappa opioid receptor), suggesting an inhibitory role for the neuropeptide dynorphin in local neuronal modulation. The researchers also noted that expression of dynorphin and KOR increased during the developmental period.