Smoldering spots in the brain may signal severe MS 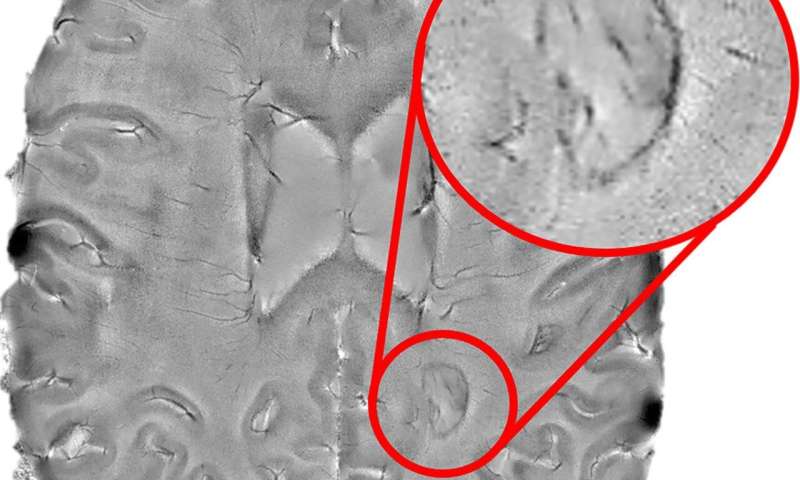 Aided by a high-powered brain scanner and a 3-D printer, NIH researchers peered inside the brains of hundreds of multiple sclerosis patients and found that dark rimmed spots representing ongoing, “smoldering” inflammation, called chronic active lesions, may be a hallmark of more aggressive and disabling forms of the disease.

“We found that it is possible to use brain scans to detect which patients are highly susceptible to the more aggressive forms of multiple sclerosis. The more chronic active lesions a patient has the greater the chances they will experience this type of MS,” said Daniel S. Reich, M.D., Ph.D., senior investigator at the NIH’s National Institute of Neurological Disorders and Stroke and the senior author of the paper published in JAMA Neurology. “We hope these results will help test the effectiveness of new therapies for this form of MS and reduce the suffering patients experience.”

Affecting more than 2 million people worldwide, multiple sclerosis is a disease for which there is no cure. The disease starts when the immune system attacks myelin, a protective coating that forms around nerve cells in a person’s brain and spinal cord, to produce a variety of initial symptoms, including blurred or double vision, problems with muscle strength, balance and coordination, and abnormal sensations. Treatment with anti-inflammatory medications designed to quiet the immune system has helped some patients fully or partially recover. Nevertheless, a significant subset of patients will eventually suffer from a longer lasting, progressive form of the disease, which can cause further problems including paralysis, loss of bladder control and problems with attention, thinking, and memory.

Doctors often use magnetic resonance imaging (MRI) to diagnose patients as the immune system’s attack produces lesions that appear as spots on scans of patients’ brains. While some of the lesions heal, completely or partially, other lesions remain and rimmed ones appear to actively expand, or “smolder”, for many years. Nevertheless, until recently, researchers did not fully understand the role chronic active lesions play in the disease, in part, because it was difficult to find the ones that remain chronically inflamed.

Starting in 2013, Dr. Reich’s team showed that by using a high-powered, 7-tesla MRI scanner, they could accurately identify damaging, chronic active lesions by their darkened outer rims, in agreement with previous studies.

“Figuring out how to spot chronic active lesions was a big step and we could not have done it without the high-powered MRI scanner provided by the NIH. It allowed us to then explore how MS lesions evolved and whether they played a role in progressive MS,” said Martina Absinta, M.D., Ph.D., the post-doctoral fellow in Dr. Reich’s lab who performed these studies.

“Our results point the way towards using specialized brain scans to predict who is at risk of developing progressive MS,” said Dr. Reich.

The team then analyzed a subset of patients whose brains had been scanned once every year for 10 years or longer. Their results suggested that, while the rimless lesions generally shrank, the rimmed lesions either grew or stayed the same size and were particularly damaged.

Finally, the team used a 3-D printer to compare the spots they had seen on scans to the lesions they observed in brain tissue samples autopsied from a patient who had passed away during the trial. They found that all expanding rimmed spots seen on the scans had the telltale features of chronic active lesions when examined under a microscope.

“Our results support the idea that chronic active lesions are very damaging to the brain,” said Dr. Reich. “We need to attack these lesions as early as possible. The fact that these lesions are present in patients who are receiving anti-inflammatory drugs that quiet the body’s immune system also suggests that the field of MS research may want to focus on new treatments that target the brain’s unique immune system—especially a type of brain cell called microglia. At the NIH, we are actively seeking patients who want to participate in studies like these.”