An online ‘doctor bank’ could save the NHS millions of pounds by plugging hospital staff shortages at the last minute.

The scheme hopes to create a catalogue of locum doctors, who are essentially freelancers, to fill shifts at major hospitals across the entire country.

Currently, hospitals trying to plug last-minute gaps in their rotas have to fork out up to £4,000 per shift by paying expensive agencies for staff at short notice.

It does this by connecting the doctor to the hospital online without the human effort which would be necessary at a normal job agency, meaning it can charge less on top of the doctor’s fee. 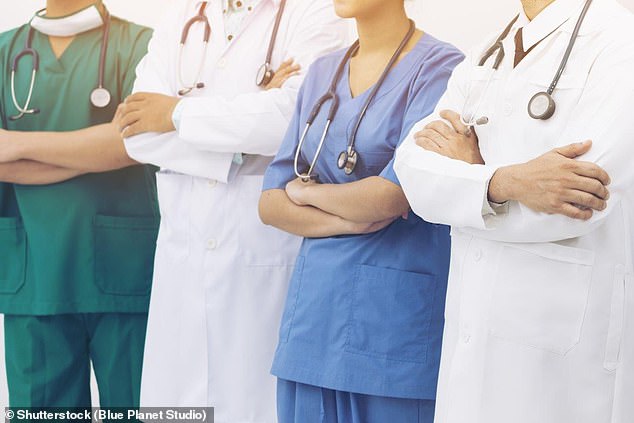 The digital staff bank works by connecting hospitals and doctors online so the hospitals can advertise when they need cover and have shifts available, and doctors can choose when and where to work (stock image)

Around 4,500 doctors are already signed up the scheme, being used by eight major NHS hospital trusts across the south of England.

They include health boards operating in Gloucestershire, Dorset, Wiltshire, Surrey, Hampshire and London.

Other similar agencies exist – but the Locum’s Nest Digital Collaborative Bank is the biggest of its kind. It plans to expand nationwide.

Figures show the NHS in England is short of around 10,000 hospital doctors, placing even more pressure on hospitals ahead of the winter.

Locums are so in demand that some hospitals are paying up to £4,000 for cover for a single shift, The Telegraph reported in October.

And thousands of shifts have to be filled each year – a trial of a similar doctor bank in south-east England saw 40,000 filled by locums last year.

Locum’s Nest said if all of those shifts had been handled by a recruitment agency they could have cost the NHS £4.8million.

In comparison, it claims an online arrangement like its own bank could have slashed the costs down to just £500,000.

Whereas a traditional works by receiving a call from the hospital then ringing around its own clients to try and find a suitable match for a shift, Locum’s Nest said its online system cuts this out and hospitals’ online requests show up for doctors who have chosen a skill set and location which fit the job.

The doctor then applies for a shift online and the hospital directly chooses which one to employ for the work and simply clicks yes or no.

It claims to already have saved the eight hospitals it works with £26million over the last 18 months.

There are around 30 similar banks being developed around the country, in areas including Hertfordshire, Bedfordshire, London, Yorkshire and Cheshire.

HEALTH CHIEFS URGE HOSPITALS TO USE AGENCY AS A LAST RESORT

The health service could free up £480million each year if trusts filled temporary vacancies with workers from a ‘staff bank’ rather than using expensive staffing agencies, according to NHS Improvement.

Temporary employees supplied by agencies, including doctors and nurses, cost on average 20 per cent more than those from NHS staff banks, despite them doing the same job.

Bank staff tend to come from internal pools of workers who are already employees of the specific health service trust and have agreed to work flexible shifts.

NHS Improvement, which oversees hospital trusts, has called on all trusts to take a ‘bank-first’ approach to recruiting temporary staff and to only use agencies as a ‘last resort’.

It claims the five most expensive locum doctors cost the NHS more than £2 million a year.

One agency even charges up to £480 an hour for a consultant, compared to the £76.10 the NHS would expect to pay if a medic came from its own banks.

The Telegraph reported some hospitals are even forking out up to £4,000 for a single shift from a locum (freelance) doctor.

‘But an over-reliance on high-cost private agencies when there are other options available is not good for patients or for the NHS’s finances.’

‘The Digital Collaborative Bank allows any trust and any doctor across the UK to be part of a universal pool.

‘Together this will save the NHS millions of pounds per year, all of which can be put to better use hiring more nurses and doctors, updating equipment or offering new services.’

The company plans to set up one giant staffing pool for the entire of the NHS, which doctors could go online to to book themselves in to work vacant shifts.

There are around 111,000 hospital doctors working in the NHS but some 10,000 more are needed to fill all available positions, according to The Guardian.

And some areas of the country are worse hit than others – rural and coastal hospitals find it more difficult to recruit full-time medics.

A report by the Royal College of Physicians revealed 85 per cent of doctors hired last year went to urban hospitals, while just 15 per cent to less populated areas.

Specialised consultant posts are going empty, too, with 43 per cent of all job adverts left unfilled last year – cancer doctors and brain and heart experts were in particularly short supply.

Using staff banks mean hospitals can share their resources and plug gaps in their own staff using temporary employees from elsewhere.

‘From the doctors’ perspective, it’s so much easier for them, having eliminated a lot of time dealing with paperwork.

‘They’re also more engaged with the trust and can manage their shifts quickly and easily.

‘The other benefit is that doctors actually want to use it – which makes it so much easier to engage with them.’