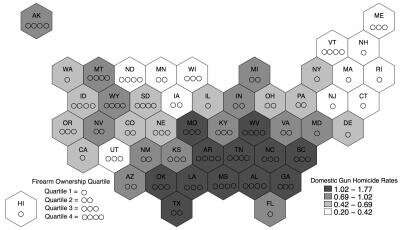 A new study in the American Journal of Preventive Medicine, published by Elsevier, reveals a unique and strong association between firearm ownership and the risk of domestic homicides. For each 10 percent increase in household gun ownership rates, the findings show a significant 13 percent increased incidence of domestic firearm homicide. The homicide risk differed across victim-offender relationships, with nondomestic firearm homicide rising only 2 percent among firearm owners.

“While personal protection is a commonly cited reason for owning a gun, our research shows that firearm ownership also confers significant risks to loved ones, as they are more likely to be killed if there is a gun in the household,” said lead investigator Aaron J. Kivisto, Ph.D., School of Psychological Sciences, University of Indianapolis, Indianapolis, IN, USA. “Our findings highlight the importance of firearm removal in protecting victims of domestic violence, the majority of whom are women.”

The investigators looked at annual homicide rates in all 50 US states from 1990 through 2016, across a variety of victim-offender relationships, including homicides of intimate partners, other family members, acquaintances, and strangers. Data were drawn from the US Census, Bureau of Labor Statistics, National Institute on Alcohol Abuse and Alcoholism, and Federal Bureau of Investigation’s Uniform Crime Report. They examined whether state-level household gun ownership rates were uniquely associated with homicide rates within specific victim-offender relationships.

Researchers noted significant variations across states in the rate of gun-owning households in the US, ranging from 10.4 percent to 68.8 percent. Differences were observed by regions; for example, higher rates were found in states in the south and west, whereas lower firearm ownership was observed in the Northeast region. The study demonstrated that the incidence of domestic firearm homicide was significantly higher in states at the top end of the spectrum. Nearly one in three homicides was classified as domestic with higher domestic firearm homicide rates observed in southern states and lower rates occurring in the northeast. Approximately half of all homicide victims were classified as friends/acquaintances.

The results point to the need to more fully understand the role of firearms across the diverse social and relational dynamics implicated in acts of fatal gun violence. As the number of deaths caused by firearm violence continues to rise in the US, researchers have started to examine potential causal factors, one of which is the number of households with firearms. Past research has consistently pointed to an association between state-level gun ownership and rates of firearm mortality, including suicides and homicides. The results of this study suggest that the risks of gun ownership on homicide rates are relatively specific to domestic homicides, which the study defined as the homicide of an intimate partner or other family member.