A Ban on Flavored E-Cigarettes Would Sharply Cut Sales A ban on flavored e-cigarettes would not only severely dent sales of Juul Labs’ popular vaping products, but also have a chilling effect on the little-regulated $2.6 billion industry of roughly 20,000 vape and smoke shops that sprang up across the country in the past few years.

But a day after Alex M. Azar II, the health and human services secretary, said the Food and Drug Administration would draft a plan within weeks that would remove flavored e-cigarettes and nicotine pods from the market, there were already signs that some companies were considering legal challenges or lobbying efforts to keep two flavors safe — mint and menthol.

One Juul official said the company was deliberating whether to challenge the proposed restrictions specifically on those two flavors.

When Juul stopped selling fruit flavors like mango in retail stores last year, Kevin Burns, the company’s chief executive, said he wanted to keep mint and menthol varieties on the market, because they mirrored the tastes of traditional cigarettes.

As the dominant e-cigarette company in the United States, Juul may be reluctant to take the lead on a court fight while it is boxed in by another regulatory setback: On Monday, the F.D.A. accused Juul of illegally marketing its products as safer than traditional cigarettes. A ban on most flavors would be a direct hit on Juul’s business; flavored products account for about 85 percent of domestic sales, company officials have said.

Even as it faces increased scrutiny and regulatory hurdles in the United States, Juul is pushing into new markets abroad — this week in China and Portugal — where it often faces fewer restrictions regarding the age of the buyer or its ability to offer an array of flavors.

In the United States, top health officials in the Trump administration and some lawmakers hoped the flavor ban would significantly reduce the startling rise in teenage vaping. And the ban is being drafted as health officials rush to deduce what exactly is causing an outbreak of vaping-related respiratory illnesses, which now nears about 380 cases in about three dozen states and has possible links to six deaths. Many of the illnesses have been linked to vaping mixtures with T.H.C., the high-inducing chemical in marijuana, although health officials also say that some patients report using e-cigarettes as well.

An aide to Senator Richard J. Durbin, Democrat of Illinois, who met on Thursday with Dr. Ned Sharpless, the F.D.A.’s acting commissioner, along with eight other lawmakers, said the agency planned to release the details of the ban within a few weeks and have it take effect 30 days later.

But some small business owners who built up vape and smoke shops around the popular activity say regulators, in their haste to solve a problem, are pushing through new rules that effectively punish vendors for crimes they did not commit.

Thousands of vape shops would be hard hit because much of their sales are customized, flavored nicotine blends for vaping, which health officials said would be included in the ban.

“I’ve had better days,” said Schell Hammel, the owner of a chain of vape shops in the Dallas and Houston areas. “This will definitely cause every small vaping shop, including my own, to shut down.”

Will Woodlee, a partner in Kleinfeld Kaplan & Becker, who represents tobacco and e-cigarette companies, predicted numerous legal challenges by businesses arguing that the F.D.A. would be exceeding its regulatory authority by imposing such a broad prohibition.

“Do I think those legal challenges will use the words arbitrary and capricious? Tens — if not hundreds of times — yes,” he said. “And whether this is within the agency’s discretion or authority to change the compliance policy as proposed in this way is obviously going to be the question that federal district court judges, and quite possibly federal appellate court judges, will have to decide.”

Juul said on Wednesday that it would comply with the F.D.A.’s prohibitions, although the agency’s proposal has yet to be completed or released.

The e-cigarette market was worth about $11 billion in 2018, and it is projected to surpass $18 billion by 2024, according to a report from Mordor Intelligence, a market research firm. And major tobacco companies have been making forays into the e-cigarette and cannabis industries to offset losses as smoking rates continue to decline. The number of cigarettes sold in the United States fell 3.5 percent in 2017 from the previous year, according to the Centers for Disease Control and Prevention.

For Juul Labs and the tobacco giant Altria, the risks of a broad ban on flavors would be considerable.

Facing decades of declining sales in traditional cigarettes, Altria late last year paid $12.8 billion for a 35 percent stake in Juul in the hopes that e-cigarettes would shore up its sagging business. 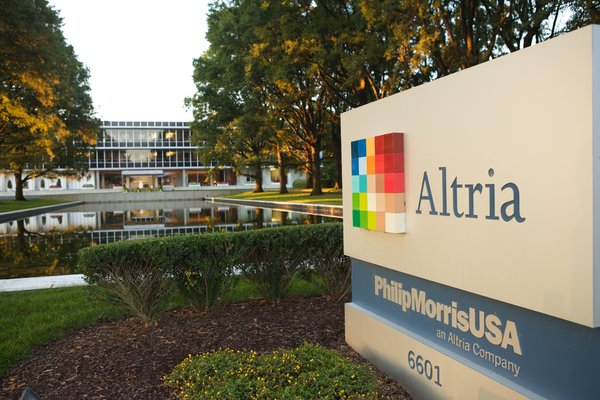 Over the past two years, the privately held Juul had emerged as one of Silicon Valley’s hottest bets, raising money from the investment firm of Nicholas J. Pritzker, a member of the wealthy Pritzker family and former chief executive of the Hyatt Development Corporation as well as a handful of hedge funds like Tiger Global Management. The Altria investment gave Juul an eye-popping valuation of nearly $38 billion.

But while Juul’s sales soared to more than $1 billion in 2018, its business was always fraught with peril from regulators. Last year when it came under pressure from the F.D.A. and the public over its products’ clear appeal to youth, the company stopped selling its popular fruity and dessert flavors in retail stores. (Consumers could still buy these flavored pods on Juul’s website.)

Competitors tried to grab Juul’s customers with their own fruity options, but many vapers simply switched to Juul’s mint flavor, said Garrett Nelson, an analyst at CFRA Research.

Altria’s stock was holding firm on the belief among some investors that mint and menthol flavors would not be banned, Mr. Nelson said.

David Sutton, a spokesman for Altria, said of the F.D.A.’s proposal, “We agree that urgent action is needed and we look forward to reviewing the guidance.”

Over the past year, Juul has retained hundreds of lobbyists to work in Washington and state capitals across the country, in an effort to fight statewide bans under consideration in California and elsewhere. It has also donated money to foundations that support African-American and Hispanic political causes, as well as to both political parties.

A ban would also raise the stakes on the proposed merger between Altria and Philip Morris International, analysts say. Separate since 2008 when Philip Morris was spun off from Altria to focus on markets overseas, the two companies said in late August that they were in talks to possibly merge again. By merging, Juul would have access to Philip Morris’s distribution network in Europe, where e-cigarette use in countries like France and the United Kingdom has soared.

If flavors were severely restricted in the United States, “Altria will really need the merger to happen with Philip Morris so it can distribute Juul to the developed markets, all of which have varying rules and regulations,” Mr. Nelson said. “The growth is in the developed markets, the U.S. and Europe, where you see people switching from being cigarette smokers to vapers.”

Juul is also setting its sights on emerging markets. This year, Juul said it would expand into India and set up an office in Singapore that would oversee it and other countries in the region, but the company has not officially done so, although it is easy to order Juul products online from much of India. Victoria Davis, a Juul spokeswoman, said its products are now available in 19 countries outside the United States.

Still, others argued a flavor ban would not be a death knell for Juul.

“This is likely to shrink the entire category, but Juul stands to gain a bigger share of a smaller market and benefit relative to their competitors,” said Dr. Scott Gottlieb, the former F.D.A. commissioner who led a crackdown on the company beginning last fall. “If you wanted to target Juul specifically, you would have had to ban the entire category of pod-based products, the sort of products that kids are most widely abusing.”

An earlier version of this article misstated the number of countries outside the United States where Juul's products are sold. It is 19, not 20.